I like to get out early-ish on Sundays to get my long run in so I still have the rest of the day to spend with the family and get done whatever else I needed to do, but had to push my run to the afternoon because of some work that needed to get done that morning.  Turns out it did work out for the best, as the weather in the AM was a really light, misty, drizzly rain that nicely seemed to stay away for most of the afternoon, allowing me to at least start the run without dealing with rain.

Planned route was running from my place to the In-Laws for dinner, but since it is only about 8km between the two, I tossed in an out-and-back on a rail trail that is fairly close to their place to get all 24km in. 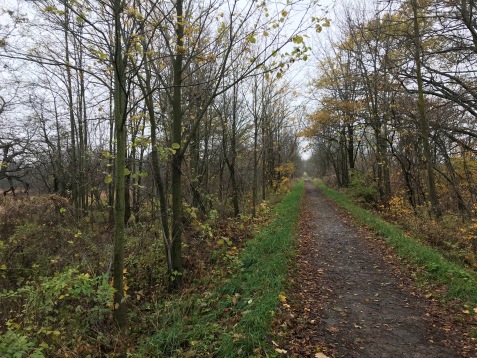 With it being late-fall, I did have a few issues to deal with that I wasn’t aware of.  First issue was in the first couple kilometres of my run when I found that the City is tearing up the paths through a park that I run through, which made it very difficult to navigate with my poor eyesight, but was also funny (to me at least) when I went “off roading” through some parts under construction to reach a path, only to realize afterwards they were re-routing the path and it would have been simple for me to walk along it, if I had only looked left just that little bit.

Most of the rest of the run was uneventful as well, although the rail trail, not being too terribly well travelled, and so not terribly well gravelled, turned out to be a slippery, muddy mess in several spots, and required some fleet footwork in several parts.  I also had to deal with foggy glasses that would fog up, then clear, then fog up seemingly of their own will…and fogging up at the worst possible moments too.

Biggest annoyance was about 12km or so into the run, when I came across a section of the rail trail that was completely de-constructed due to some construction and what looked like possible drainage-work being done in the area (not sure what was happening, but there was a huge pipe and a bulldozer parked, so I can only guess).  I still had about 3-4 more km to run, but quickly found what was left of the remnants of the trail extremely difficult to pass with my limited vision, so decided to err on the side of caution, turn around and head back.

As luck/fate would have it, it also started to rain fairly steadily at this point, but it was one of those pleasant, rainy runs largely thanks to the uncharacteristically warm +14 Celsius temperature day. 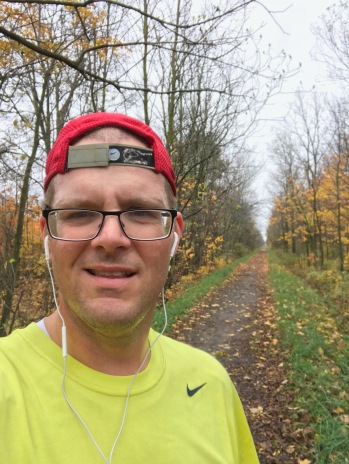 Figured I had to get my distance in somehow, and decided to try to run the rail trail the opposite direction to try and squeeze out the added distance, and it worked out nearly perfectly as well, so I didn’t suffer in that respect at all.  Did have one reminder that the seasons are changing, as I noticed it was starting to get dark nearing 4:30, something I didn’t factor into my route planning…but should have known better as we had just fallen back with our clocks.

All in all a great run, one only really marred by my forgetting to turn my Garmin back on after crossing a road, so I estimate I missed out on probably 1km of distance tracked….so really, did I ever get that distance in?  haha….

Fall colours coming a bit early thanks to @poppyjen and @cottage13tattoo So very happy with the results, have already had someone comment that it is by far the best tattoo he has ever seen....I can’t argue with him on that! Thanks again Jen!
Must be something about Feb 3rd. Two photos taken three years apart, but same unbelievable shorts and a long sleeve shirt weather! Even wore the same shirt! Was wet footed with all the puddles from the melting snow, but great 19km done solo. Three out and backs on a local multi use path to keep me off the roads today, not nearly as boring as you’d think. #bostonmarathon #bostonmarathontraining #twav #teamwithavision #blindrunner #blindrunning #justdoit #hwyrt #howwasyourruntoday #satstatchat
Chilly long run prepping for #bostonmarathon yesterday. Had about 5-8cm of fresh snow, -8°C with a pretty heavy wind. Pace sucked, wind sucked, footing really sucked but run done! Ice in the beard wasn’t as impressive as I would have liked. Can’t wait for Boston to come!! #blindrunner #blindmarathoner #marathontraining #teamwithavision
was quite the hot and spicy run today! #blindrunner #running #isithotout